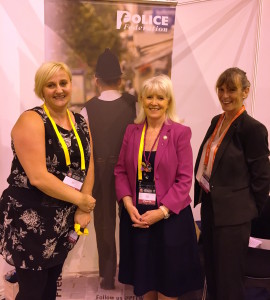 I was invited by the IAWP (Independent Association of Women Police) to speak at their 100th Anniversary Conference in Cardiff. Now, I’m used to people signing up to my workshops before the event, so this was a bit of an unknown quantity as delegates would be just turning up on the day. I did, however, circulate my poster to various people the day before but it turned out to be unnecessary as I had a full house, extra chairs brought in and still it was standing room only.

With women now working well into their 50’s and beyond and the government advising of the benefits of retaining older staff especially where the cost of training and investing in the future of all these individuals has reached huge proportions and should not be rejected without a lot of thought and consideration.

Menopause is still a taboo subject, stigmatised, joked about but it is very real to the millions of women in the UK experiencing debilitating symptoms. 47% of the UK workforce are aged 50-59. The crucial age group for menopause, however, is 45 – 59. It’s a major event in a woman’s life and yet nobody has really thought about the impact in the workplace. And, believe me, it is a subject worth thinking about, especially when taking into consideration the costs already alluded to, the years of training and the experience and expertise gained. You’re not going to throw that away, are you?

When it comes to staff underperforming and this is another factor, it is generally considered the right thing to do to explore health factors.   Menopause is not currently a consideration; in fact it doesn’t even get a mention on the organisation health agenda but it should be and everybody would be the better for recognising menopause as a factor for underperforming rather than taking more serious action which would prove to be such a waste of everyone’s time, effort and cost.

But let’s get onto the workshop – entitled ‘A Perfect Storm – Menopause in the Workplace’. It was a very live show. All attendees showing a lot of interest with lots of questions that needed answering as well as throwing in some ‘what do we do next’ theories. 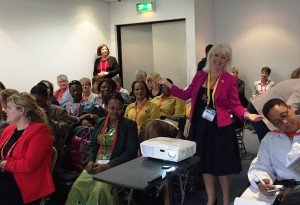 Hot flushes are not the first symptom to be experienced. We discussed this and a number of women recognised that my description of feeling as if you had a hangover every morning, reflected their own experience as a starting point. It was also recognised that support for this transitional stage of a woman’s life is sorely missing and knowledge and that knowledge should be shared at an early stage of this transition rather than when women are in their mid-50’s and realising through the benefit of hindsight. Hindsight is a wonderful thing but with menopause, it’s too late, they’ve already been resigned, or, worse, faced disciplinary procedures and sacked; women need to know more sooner rather than later.

Menopause is obviously a sensitive subject to discuss, particularly for women – it represents a stage of their life that says ‘I’m getting older’ and they don’t feel that the description fits them. They’re right, it doesn’t. What’s not being recognised, however, is the fact that this is the start of a whole new phase in a woman’s life when she can be more creative and productive than previously because of the wealth of experience and training she has acquired. The fact that menopause can get in the way can be disasterous. It doesn’t have to be! A little knowledge goes a long way and can be the catalyst to better health and wellbeing as well as better working practices.

The audience also discussed how line managers (generally men) are not always comfortable speaking to women about ‘women’s problems’, or even to each other about the subject of menopause. One lady said to her manager “be brave and write this down, I’m going through menopause and I’m having a tough time”. Her manager sat there, wide eyed and open mouthed not knowing what to do but it was a starting point. He now knows something!

The good news is that there is at least one police force in the UK acknowledging menopause. This is fantastic news, it’s a starting point and more need to follow. It would be good to engage with male colleagues on this issue but it looks as if women will be leading the way. Women are truly fearful of symptoms and the effect on their lives, both at home and at work. You can make excuses at home, there is no hiding place at work which can result in disciplinary procedures taking place but a word of warning, there have been tribunals under the heading of Sex Discrimination – menopause and the employer has lost the case.

Most large organisations state that health factors should be explored where underperformance is a factor. Unfortunately menopause does not have any consideration on any health agenda but is a contributing factor job losses and subsequent tribunals.

The answer really is simple. Let’s start a conversation about this subject, let’s train a few individuals to understand menopause where they can ‘signpost’ staff towards the right course of action, rather than ignoring it, sweeping if under the carpet or hoping it goes away. Menopause is here to stay and improving knowledge will go a long way to reducing absenteeism and sustaining, even improving productivity.

SAVE & ACCEPT
Go to Top